We use cookies to operate this website and to improve its usability. Full details of what cookies are, why we use them and how you can manage them can be found by reading our Privacy page. Please note that by using this site you are consenting to the use of cookies. 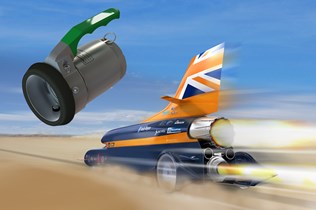 The Bloodhound Super-Sonic Car is not going to get into the desert this year to break the world land speed record.

The 1,000mph vehicle's basic build will be complete in a few months, ready for "slow-speed" testing on a UK runway.

But a delay with its rocket system means there will be insufficient time to run Bloodhound on its specially prepared race track in South Africa before seasonal rains start to fall.

Assuming that goes well, the team would then stage a second campaign on the dried-out lakebed of Hakskeen Pan in Northern Cape, with the aim of getting all the way up to 1,000mph (1,610km/h). The hope is that this could also be done in 2016.

Bloodhound's chief engineer, Mark Chapman, is disappointed to have to announce the slip in schedule, but believes it is the right decision.

"The amount of investment to get us out to South Africa to run the car - to then see our efforts rained off and have to come home having done very little running makes no sense at all," he told BBC News.

"The most pragmatic thing is to deploy out to the desert in April or May next year, at the start of the dry season, and that gives us the best opportunity to build up those speeds. But, importantly, it also gives us time to complete our rocket development programme."